John J. Gill has been spending the past month with relatives at Belfast, N.Y., where he attended the golden wedding of his aunt and uncle, Mr. and Mrs. Richard Gill and the wedding of his cousin, Rozella Killian Gill; he also visited his cousin, Rev. Bernard Gill, and acted as delegate of the No. 1 hose company to the fire companies' convention at Belfast. He witnessed the fatal drive of the man in a barrel over Niagara. He writes that he will return next week.

Rosella Killian was the daughter of John Killian and Winifred Gill who was a 1st cousin of John's father Richard Gill - so John and Rosella were 2nd cousins. Rosella Killian married Cornelius McNamara on July 6, 1920 in Allegany, New York. 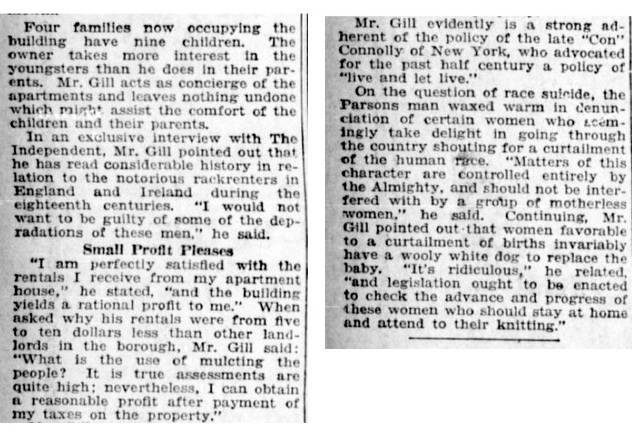 JOHN J GILL IS DEAD;
TO BE BURIED MONDAY

John J. Gill, well known resident of Parsons, died Friday afternoon following an illness of several months of complications. Though suffering intensely at times he bore it all with great fortitude, never losing the customary cheerfulness of disposition which was his.

In the trucking business for a number of years he gave up active business several years ago. Mr. Gill was a native of Parsons and had lived there since his birth 45 years ago. Deceased was much interested in sports and when he managed the St. Dominick's basket ball team it ranked among the best in the county.

Mr. Gill was a communicant of St. Dominick's Church and a member of the Holy Name Society of that church, a member of Fraternal Order of Eagles and a member of Hose Co. No. 1. He has been a councilman of this borough, serving for two terms and also acted as street commissioner.

He leaves to mourn his loss three sisters, Margaret and Bea at home and Mrs. Frank Christopher. Funeral services will be held from the home 301 Hollenback avenue Monday morning with requiem high mass at St. Dominick's Church at 9:30. Internment in family plot in St. Dominick's Cemetery at Hudson.