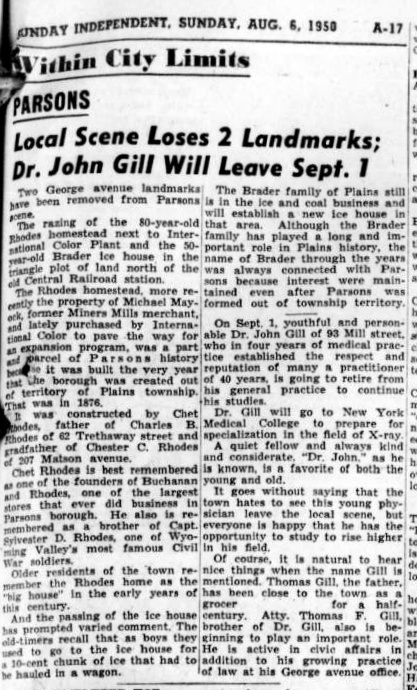 Dr. Gill was a graduate of the University of Scranton, and Jefferson Medical College of Philadelphia, where he served his internship. He received a Master of Medical Science degree in radiology, and was a resident physician in Flower 5th Avenue Hospital in radiology. He also held a cancer research fellowship.

During World War II, Dr. Gill served in the Pacific for four years as a Lt. Commander in the U.S. Navy Medical Corps. He was a radiologist at Valley Radiology Associates of Kingston, and a member of the staff at Mercy Hospital, Wilkes-Barre. He was a member of Holy Name of Jesus Church, Swoyersville.

Dr. Gill was a member of the Luzerne County Medical Society, serving as director; Pennsylvania Radiological Society; the American College of Radiology. He was also a member of the Wyoming Valley Country Club, and a founding member of King’s College Century Club.

Dr. Gill served on the board of Directors at Marywood College, and as a vice president on the Northeast Pennsylvania Alumni of Thomas Jefferson University. He was utilization review chairman of Little Flower Manor, Wilkes-Barre, and was recipient of the Dept. of the Army Certificate of Appreciation for Patriotic Civilian Service.

Funeral services will be Thursday at 9:30 a.m. from the Hugh B. Hughes and Son Funeral Home, 1044 Wyoming Ave., Forty Fort, followed by a Mass of Christian Burial at 10 in Holy Name of Jesus Church, Swoyersville.

Interment will be in St. Mary’s Cemetery, Hanover Township. Friends may call Wednesday from 2 to 4 and 7 to 9 p.m.

Memorial contributions may be sent to Mercy Hospital, the Wilkes-Barre General Hospital, the Hoyt Library of Kingston, or to the charity of the donor’s choice.