Mrs. Sarah Gavin, a well known resident of Upper Pittston, died last evening at the family home on Main Street, following a week’s illness. Her husband preceded her in death several years ago. She was a devout Catholic and a faithful member of St. Mary’s R.C. Church. She is survived by two sons and two daughters Mrs. Michael Lynott, Miss Margaret Gavin, Daniel and John. She was an aunt of P.F. Joyce, manager of the Howell & King Co.

The funeral of Mrs. Gavin of Upper Pittston was held this morning from the family home and was largely attended. At 9 o'clock the funeral procession moved from the home to St. Mary's R. C. Church, where a mass of requiem was celebrated by Rev. P. J. Gough. The following acted as pall bearers: John Kern, Thomas Harrop, John Lynott, Patrick Devers, John McAndrew and Thomas Roach. Interment was made in St. Mary's cemetery.

The funeral of Mrs. Sarah Gavin of Upper Pittston was held yesterday. It was one of the largest funeral processions witnessed in Upper Pittston in some time. A mass of requiem was sung in St. Mary’s R.C. Church at 9:30 and Interment was at St. Mary’s Cemetery. The pall bearers were John Kearns, Thomas Harrop, John Lynot, Patrick Devers, John McAndrew and Thomas Reap. 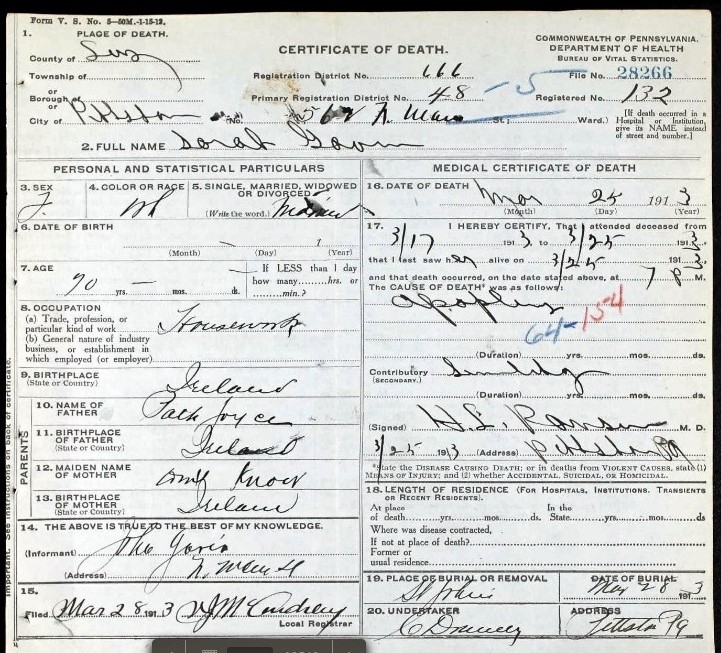