MICHAEL NOLAN, proprietor of "Nolan's Hotel," Inkerman, Jenkins township, was born in Scranton in 1856, and is a son of Peter and Catherine (Gannon) Nolan, natives of County Mayo, Ireland.

The father, who was a laborer in the mines and is still living in Inkerman, reared a family of nine children, three of whom are living, viz.: Maria (Mrs. John Gill, of Parsons, Pa.), Michael H. and Martin.

Our subject received a common-school education, and at an early age began working about the mines, which occupation he followed till 1878, when he engaged in his present business. He built his present place of business, with residence attached, in 1885.

Mr. Nolan was married February 10, 1887, to Miss Mary, daughter of Peter and Winneford (Henahan) Durkin, of Inkerman, natives of County Mayo, Ireland. Mr. and Mrs. Nolan have three children, viz.: Peter, Frank and George. Our subject and family are members of the Catholic Church; he is a member of the Emeralds, and is a Democrat in his political views.

Michael H. Nolan, aged 75, died suddenly yesterday morning at 9:45 at the family home, 60 Terrace street, of heart disease. Mr. Nolan had enjoyed his breakfast and was apparently in good health. Deceased was the father of Rev. P. A. Nolan, pastor of St. Ann's church, Bentley's Creek.

He was a native of Honesdale and had resided in the Inkerman section for the past thirty-five years.

Surviving are his wife and the following children: Rev. P. A. Nolan, pastor of St. Ann's church, Bentley's Creek; Frank, of this city; Joseph, of Sayre, and Edward, of Elmira; also the following brothers and sisters, Mary at home; Mrs. Raymond Nolan of this city; Mrs. Thomas Morris, city; Martin, city, and Mrs. John Gill of Parsons.

The funeral of Michael Nolan, father of Rev. Father Peter Nolan, will be held to-morrow morning from his home, 61 Terrance street. A solemn high mass of requiem will be celebrated in St. Mary's Church at 10. Interment will be in St. Mary's Cemetery. 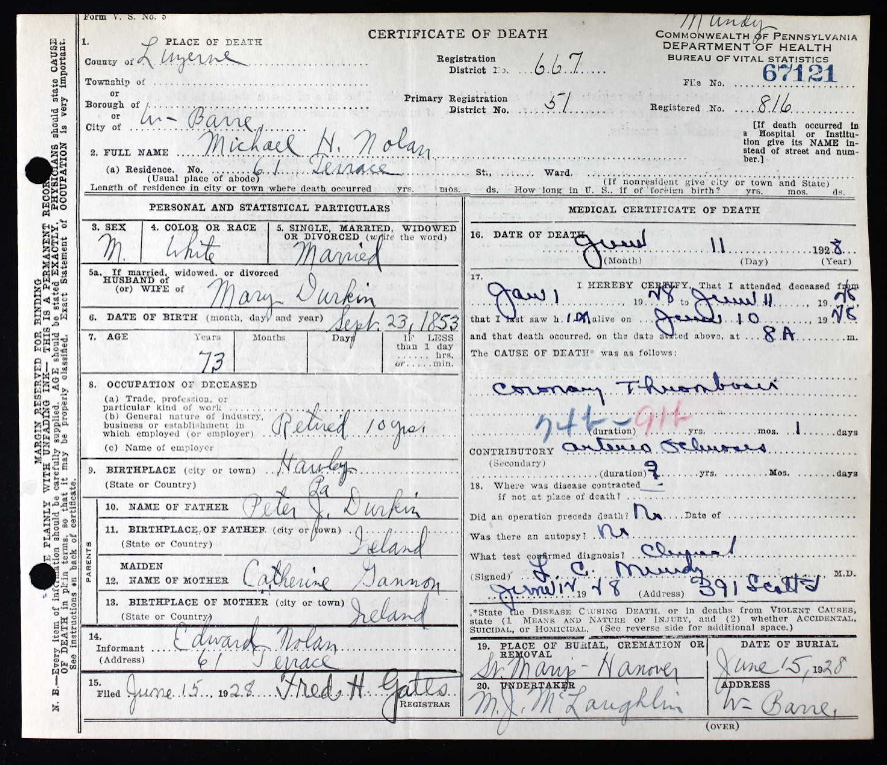