Patrick Gill, a well known and highly esteemed resident of Kingston, died at his home, 34 Main street, that place, yesterday afternoon at’ 3 o’clock following a lingering illness of complications. He was a resident of this section for many years, having resided in East End before making his home in Kingston. He was a member of St. Ignatius’ Church, Kingston, and is survived by the following children: John, Thomas and Mary, at home; Mrs. John Rushton, Mrs. James Fitzgerald, Mrs. William Sauer and Mrs. Michael Rushton all of this city; also by the following brothers, Richard of Buffalo, N.Y., Joseph of Chicago, and Peter of California. Mr. Gill is also survived by twenty-eight grandchildren.

The funeral of Patrick Gill, highly esteemed and venerated resident of Main street took place yesterday morning from the family home 34 Main street. A solemn high mass of requiem was celebrated in St. Ignatius’ Church at 9:30. Rev. Father Gill, nephew of the deceased, was celebrant of the mass; Rev. Maurice A. Hughes, deacon; and Rev. M. E. Lynott, sub deacon.

The number of friends and relatives paying their last respect to the deceased was large while the numerous floral tributes were beautiful. Rev. Father Gill pronounced the benediction at the grave in St. Mary’s cemetery at Hanover.

The pall bearers were: Thomas and Richard Gill of Pringle; Thomas, John, Richard and Peter Gill, of Parsons. 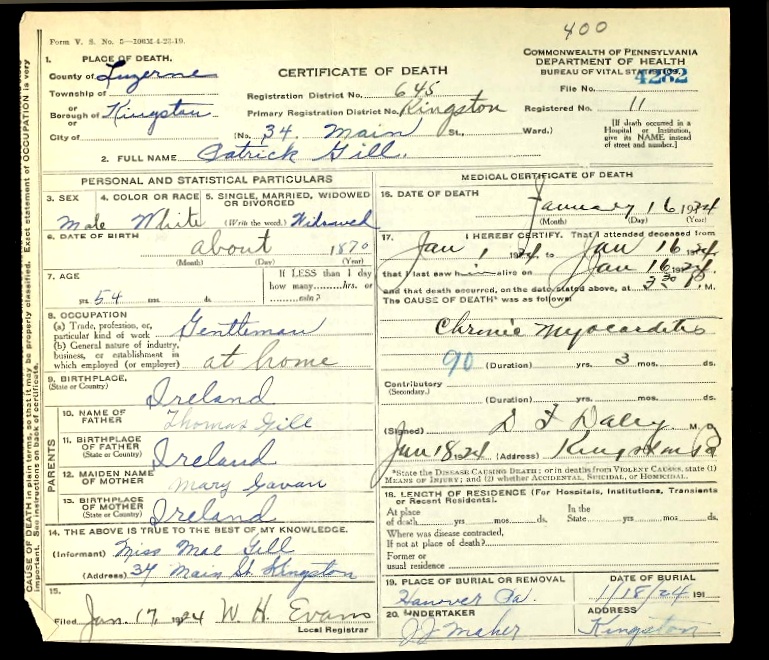