Death called to her reward yesterday morning at 5:30 one of Pittston’s pioneer residents, Mrs. Peter Joyce of 558 North Main Street. Her death came most unexpectedly and was a severe shock to the family and friends. Mrs. Joyce retired Saturday night feeling as well as usual. At 4:30 a.m. she became ill and Dr. Ransom was summoned and found her condition serious. Medical aid did all that was possible to be done, but she gradually grew worse and the end finally came. Her death removes one of the early residents of Pittston.

She came to this country when quite young from her native home in County Mayo, Ireland and had since then made her home in Pittston. Her husband, Peter Joyce, died about twelve years ago. For several months past the deceased had not enjoyed the best of health but was able to be about, though she seldom left her home.

She was a devout Catholic and was of a kind and generous disposition and her sudden death is mourned by a large circle of friends. She is survived by the following children: P. F. Joyce, manager of the Howell King brewery; Joseph P., who holds a similar position in the bottling department; Miss Margaret, Miss Mary and Miss Elizabeth Joyce, all at home and one brother, Philip Gavin, in London, England.

The funeral will take place on Wednesday morning with a requiem mass in St. Mary’s Church, Upper Pittston, and interment in the old Church Hill Cemetery beside her husband. 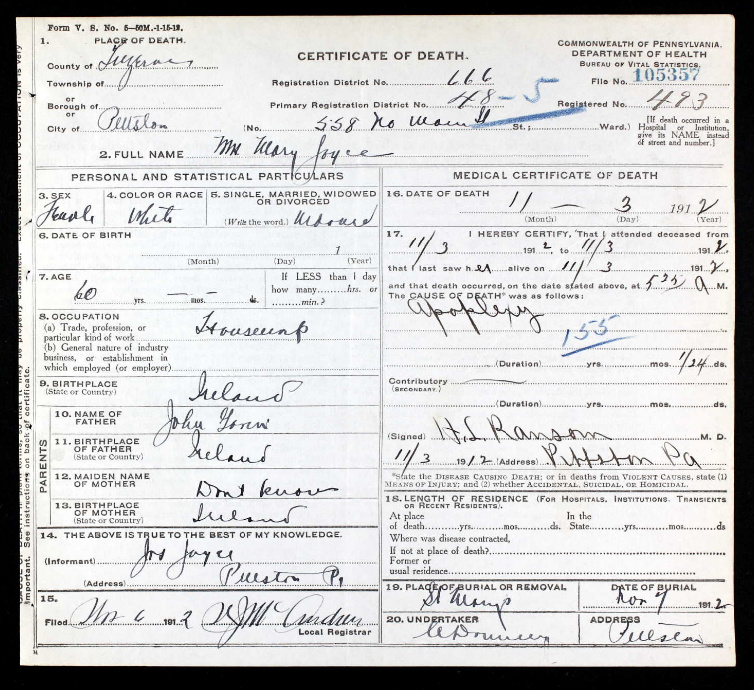 This Death Certificate lists Bridget's name as Mrs. Mary Joyce but according to her obituary and other records her first name was Bridget. The informant is Bridget's son Joseph Joyce who continued to live in the Joyce Family house at 558 North Main Street until his death in 1954. He was the last Joyce to live in the house and after his death the house was torn down.

Many friends and neighbors paid their last tribute of respect to a departed friend at the funeral of Mrs. Peter Joyce of North Main street, Upper Pittston, yesterday morning. Deceased was a pioneer resident of this city and many people from up and down the valley were present.